The Start of Haberfields Milk Albury 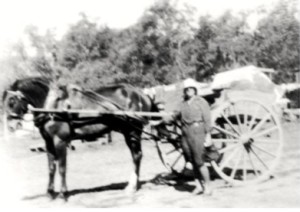 “As we have seen, Jock Haberfield was holidaying at Willow Bank at Christmas 1930 when Nat Gray told him the Albury Rural Co-operative Butter Factory had a milk run for sale. Nat was a director of the butter factory, which had pioneered pasteurised milk in the area, and he supplied the factory with milk and cream.

There had also been a further increase in Albury’s population, which first exceeded 10,000 in about 1931. By September 1932, the Border Morning Mail was reporting a boom in dairying and stated that the Albury Pastures Protection Board had 400 registered dairies, an increase of 100 over 1931.

Jock thought of the farm he had an option on at Nullawarri, but decided to buy the milk run to help out Nat Gray, just as a temporary measure. “I reckon I’d take it on for six months, but after six months I was nearly broke so I had to keep going,” Jock recalled in 1992. “I bought the crates, bottles and a 1928 Ford Model A truck for 300 pounds. Annie wanted to give me her milk run, but we joined the two together. We used to go out together in the truck on the combined run every morning delivering pasteurised milk. Because pasteurised milk would keep a day, we only had to do one delivery a day.”

Haberfields Model Dairy is reckoned to have begun in this way in June 1931, but it remained a delivery run only for some months, trading as Gray & Haberfield, Willow Bank, Albury.

Annie and Jock were married at 7am on April 5, 1932 at the Albury Wesleyan Methodist Church in Olive St, with a wedding breakfast at Willow Bank. “We drove to Melbourne for our honeymoon,” Jock said. “We got caught in the floods at Seymour. The hotel put us up, but in single beds!

However, despite this I managed to have a family. I’m very proud of four boys and two girls, all married except one, with three boys working in the business.

“After some months, and shortly after we were married, the butter factory was going bad and in trouble. They said they had to sell the pasteurising plant and offered me it first for 350 pounds. The day after I bought it, but hadn’t paid for it, the NSW Savings Bank closed (during the height of the financial crisis between Premier Jack Lang and the Commonwealth).

“That put me in trouble as I couldn’t get my money, but eventually things worked out. I bought a block of land at 395 David St for 200 pounds and Alan Stow built our house for a contract price of 500 pounds, and we put in 50 pounds worth of extras.”

Interviewed in the same house in 1993, Jock recalled that it was built on the site of an old cottage where Annie’s grandparents, John and Mary Ann Sharp had once lived.

“I built the factory under contract labor,” Jock said. “I arranged for the Albury Rural Co-operative Butter Factory to pasteurise my milk until I could build a place. I took on George Lyons, who used to make the butter at the butter factory. Because I was up at 2am or 3am to deliver milk, I wanted someone who knew about pasteurising and George could keep the steam boilers working.”

Mayor Alf Waugh declared the factory open, while Jock continued to work during the official ceremony.

Before the factory was built, they took on Annie’s cousin, Frank Gray, and Norm Wissen, to help in the deliveries. These were Haberfield’s first two employees. Norm was killed in Canada in World War II training for the air force.

* The above is an extract from Haberfield A family dairy Tradition by Howard C. Jones 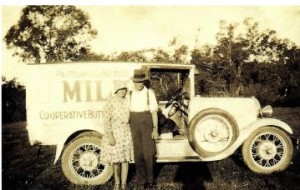 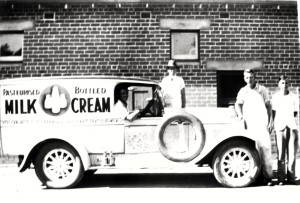 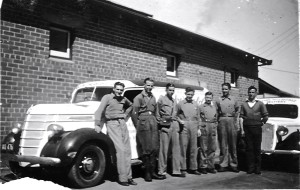 1938 Some staff besides delivery vans 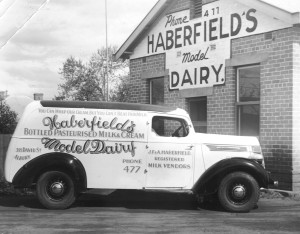 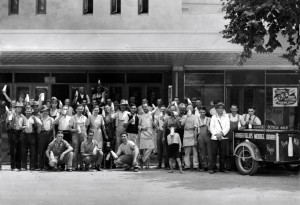 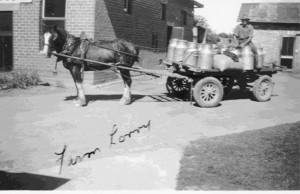 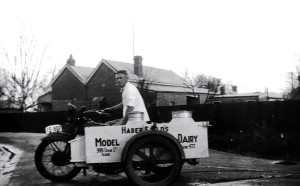 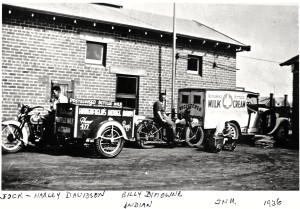 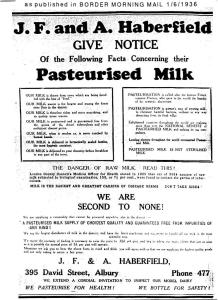